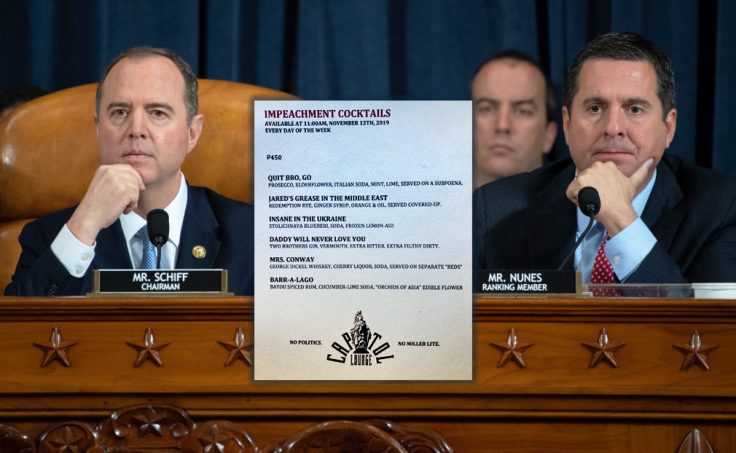 Comment: If the Dems wanted to hide their iniquities, they should have left well enough alone. They are being hoisted on their own petard of arrogance and contempt of the truth.

Impeachment hearings taking place on Capitol Hill on Wednesday produced shocking evidence of moral corruption in the nation’s capital. A number of Twitter users expressed dismay after a bombshell document related to the House impeachment inquiry was posted on the popular social networking website.

Prior to the start of Wednesday’s hearing, the Capitol Lounge, a D.C. drinking establishment frequented by congressional staffers, announced a special menu of “impeachment cocktails” for patrons with nothing better to do than watch political hearings at a bar in the middle of the day.

In the opinion of most analysts who reviewed the document, it was a stunning indictment of the moral and intellectual derangement of the left-wing political professionals who reside in Washington.

The cocktails in question, priced at 450 Russian rubles ($7), were given clever resistance-themed names and descriptions. The “Daddy Will Never Love You” martini, for example, was advertised as “extra bitter” and “extra filthy dirty,” a reference to the fact that the words “bitter” and “dirty” can have different meanings, depending on context.

In fact, most of the other cocktail descriptions used wordplay in an effort to entice patrons and inject amusement into the bitter hearts of resistance libs. The fizzy, fruity concoction known as the “Quit Bro, Go” would be “served on a subpoena,” while the rye-based “Jared’s Grease in the Middle East” would be “served covered-up.”

The menu concludes with the establishment’s tagline: “No Politics. No Miller Lite.”

A handful of Twitter users expressed joy and excitement in response to the impeachment-related document.

i laughed so hard i think i hurt myself.

I want one of each. I LOVE the clever names and bet they taste great!

Others were not amused.

This is such a tired schtick.

Most Americans, meanwhile, went about their daily lives, blissfully unaware of the moral turpitude on display in our nation’s capital.