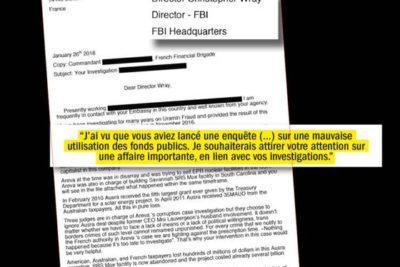 How could I miss it? Harry Reid, John Kerry and Al Gore named in Areva’s $28 billion corruption case

“When, at the beginning of the year [2018], I discovered the scope of this case, I forwarded to the FBI director all the elements I had been able to get my hands on,” Marc Eichinger told French Economic monthly magazine Capital (1). This private investigator specialized in the fight against serious international crime and corruption is very familiar with the case: he is the one who wrote the report submitted in April 2010 to Areva’s security department to denounce the potential fraud linked to the acquisition of Uramin three years earlier.

Shocked by this new case of corruption in the United States, he also referred the whole case to the French courts, causing the investigation services to overheat in the middle of the summer.

Areva buys Ausra from Al Gore, one of the main shareholders

At the heart of this new scandal, which has not yet broken out in the United States, are the conditions under which Areva acquired, in February 2010, Ausra, an American startup specialized in solar energy.

Why did Areva agree to give up so much money for Ausra? Marc Eichinger asked himself this question for several years.

To further his investigation, Marc Eichinger went to the United States. There, he studied the incredible story of the plant that Areva was responsible for building for the Department of Energy, which, as we will see, is directly related to the Ausra … and Al Gore.

Instead, the Obama administration and Areva persisted. And, miraculously, a few months later, a new customer for Mox shows up: the Tennessee Valley Authority (TVA).

This unexpected salvation plan allowed the Obama administration to convince Congress to continue funding the work.

Not much. Except that TVA is very close… to Al Gore’s family!

The father of the future American vice-president, himself a Democratic senator from Tennessee for several decades, made TVA his “thing” to the point that, during the 2000 presidential race, the American press would present VAT as the “candy store” of the Democratic candidate’s family.

As a result, the intervention of this federal agency in the Mox Services case, which occurred at the time of Areva’s acquisition of Ausra from Al Gore, raises questions. Wouldn’t that be a case of quiproquos?

The case does not only involve the former vice-president. Three other names in the Democratic Party are mentioned in the file. Starting with John Kerry, Barack Obama’s future Secretary of State during his second term.

Kerry was then a senator and chairman of the Foreign Affairs Committee. At the end of January 2009, during a public senatorial hearing and in the presence of Al Gore, he drew up a long eulogy of Ausra, stating that this company represents the future.

Coincidentally, John Kerry is also a shareholder of the fund that invested in Ausra!

The second leading figure of the Democratic Party involved in the story is American businessman John Doerr. He co-leads Kleiner Perkins and he is known to be one of the party’s leading fundraisers. He is very close to the Clintons and the Obama administration: in February 2009, the White House catapulted him to the Council on Jobs and Competitiveness, an organization that advises the president. The many financial benefits John Doerr will receive during the Obama presidency will generate many scandals (including the Solyndra affair in 2011), forcing Energy Secretary Steven Chu to step down.

Finally, the Obama administration will be very generous with Ausra: in February 2010, at the time of its acquisition by Areva, Ausra received a federal grant (non-repayable) for $13.9 million for a solar plant project in California, the cost of which is estimated at $40 million.

Despite all this, Ausra, who was renamed Areva Solar, has never generated anything but losses.

And it was definitively liquidated in 2015.

Construction of the Mox Services plant has also been halted, but the bill continued to rise for the U.S. federal budget. To safely store weapons-grade plutonium (highly unstable material) that should have been transformed into Mox fuel, Washington would spend some $19.9 billion, according to a Department of Energy study.

To recoup its losses, the Trump Administration should trigger a corruption trial against the French company, and, in the event of a win, the rule is that the amount of the fine should cover the total financial loss.

The prosecutor could simply claim from Areva the $243 million corresponding to the amount of the acquisition of Ausra. But it can also very well demand repayment of all the federal expenses incurred in the case, namely: the $7.7 billion invested in the mox plant that has never been built, the $19.9 billion that will be spent on the management of unprocessed plutonium and the $243 million for the acquisition of Ausra, for a total of almost $28 billion.

The Department of Justice would do well to be a little less timid, and to take lessons from the Democrat’s DOJ and the way they weaponized it in the Trump Russia hoax. They should launch a serious criminal investigation into the four musketeers …