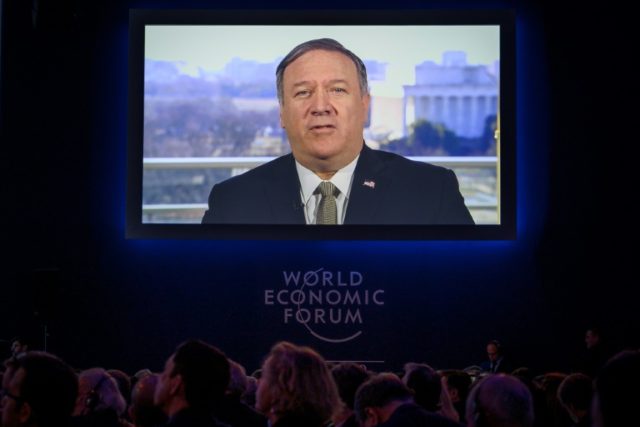 Secretary of State Mike Pompeo told attendees at the World Economic Forum in Davos, Switzerland, on Tuesday that the defeat of entrenched political interests in top offices around the world – from America to Italy to Brazil – was a “positive development” for the world and a return to the worldview that “nations matter.”

Pompeo enthusiastically defended President Donald Trump’s 2016 campaign slogan – “Make America Great Again” – as a philosophy that accelerated economic growth in the country and improved the lives of average Americans. He encouraged the gathering, including both world leaders and influential global businesspeople, to embrace “economic security” and reject the influences of international bodies far removed from the interests of the people.

“Over the past few years, all around the world, voters have tuned out politicians and political alliances that they thought weren’t representing their interests,” Pompeo told the crowd via satellite from Washington, DC. “In Ohio, Rio de Janeiro, and in Rome, people are asking questions that haven’t been asked, or at least haven’t been taken seriously, in an awfully long time. Is economic globalization really good for me? Are our political leaders adequately protecting us from threats like terrorism? Are they working to secure our national interests abroad?”

The answers to most in elections that have rejected established powers appeared to be “no,” something Pompeo suggested had frightened many in the international business community.

“I’d argue that this disruption is a positive development,” he nonetheless insisted. “We are embracing time-tested truths. Truths like this: Nations matter. No international body can stand up for a people as well as their own leaders can. Strong borders are key to strong nations.”

Pompeo specially highlighted the idea that “economic security is national security” – without a robust economy, nations can fall prey to larger economic powers, resulting in extreme debt, wealth inequality, and loss of freedom. Invoking President Ronald Reagan, Pompeo insisted that his classic slogan “peace through strength” referred to economic strength as much as it did to military strength: “It was the strength created by a free and robust economy that not only creates wealth, but also freedom.”

“This economic blueprint – low taxes, streamlined regulations, and trade reform – can work for you and your countries as well,” Pompeo told those in attendance, urging them to embrace the philosophies of the Trump administration.

Pompeo’s bid to convince developing nations at a crossroads to choose American-style development comes at a time in which Washington finds itself facing an onslaught of counter-advertising from China, which has spent the past three years selling the developing world economic and political authoritarianism. It has done so most prominently with the Belt and Road Initiative (BRI), a campaign to build ports, railways, and roads connecting Beijing to Lisbon, echoing the path of the original ancient Silk Road. China’s officials have claimed, in attempts to convince countries to allow teams of Chinese government officials to build and control this infrastructure in their countries, that much of Africa, the South China Sea, and Latin America also had ties to the ancient Silk Road, despite a lack of historical evidence.

“The Belt and Road Initiative proposed by President Xi Jinping is a public good China offers the world. Indeed, it has grown into the largest platform for international cooperation,” Chinese Foreign Minister Wang Yi told the United Nations General Assembly in September. “The Initiative is open, transparent and inclusive; it is based on international rules and laws, and it aims to achieve green, environment-friendly and sustainable development.”

Reality has not lived up to Wang’s promise. Nations embroiled in the BRI now carry outstanding debts to China that have forced some, like Sri Lanka and Djibouti, to give up territorial sovereignty where the projects were built. Others – like Pakistan, Malaysia, Kenya, and Ecuador – are so heavily indebted to China that they are now on the brink of bankruptcy, potentially forcing them to allow a permanent Communist Chinese presence in their country.

The Trump administration has made countering the BRI propaganda effort a priority, calling the plan “debt trap diplomacy.”

During his Davos address, Pompeo told the audience that Washington was “rebalancing the relationship with China, alongside partner nations in Asia and all around the world.” Asked to elaborate on the relationship between the two countries, Pompeo urged China to embrace political freedom as a means to economic freedom.

“These principles of democracy, these things that have created so much wealth for the whole globe, will drive the relationship between the United States and China in the years ahead, and we hope that China will adopt policies that are consistent with that,” Pompeo said. “If they do, I am very confident that our two nations can thrive and prosper together.”